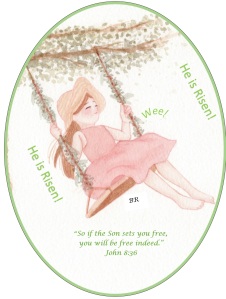 “About midnight Paul and Silas were praying and singing hymns to God, and the other prisoners were listening to them. Suddenly there was such a violent earthquake that the foundations of the prison were shaken. At once all the prison doors flew open, and everyone’s chains came loose.” Acts 16: 25-26″

Can you imagine being beaten and thrown into prison, with your feet in stocks, with a jailer carefully guarding you, and being able to sing praises to God? There is a freedom in the spirit that overcomes all forms of bondage, and that freedom comes from knowing the truth. (John 8:32)

There was a time after being set free, I fell into the yoke of slavery to my former sins, and nothing was working for me. So, the Lord put me in a position where I could see. Day and night, it seemed, I reflected on my sins, and the more I did, the more I was unable to be who He created me to be. This did not mean I was free to sin, but quite the contrary, to know He not only provided redemption, but also a way of escape in every temptation.

It was not my Savior who was condemning me but my enemy, the devil, who delights in his accusations and convincing us God’s redemption was limited. But Jesus said, for to whom the Son sets free, that person is absolutely free. So, I either believe His Word or I don’t. I had a choice. It wasn’t enough to acknowledge and confess my sins; no, in order to be set free, I had to really believe. (Galatians 5:1, Romans 8:1, 1 John1:9)

What the law couldn’t do, Christ does by opening the door of our imprisonment. We, who believe, are no longer judged by the law but justified by what Christ’s sacrifice on the cross, by taking on our death sentence and throwing away the key. Now as believers we can walk free in the knowledge, it is not our righteousness that determines our salvation, but Christ’s alone. It’s one thing to understand Christ’s salvation, but an entirely different matter to believe and claim it as our own. (Ephesians 1:13-14)

I remember many years past when my father was in the last stages of terminal cancer. Cancer had spread to his bones and he was in much pain. At this time a hospice nurse would visit and administer morphine shots, and attend to his special needs. She was a believer in Jesus Christ and would share the gospel with my dad. But my dad had a lot of pride, a self-made man, declaring, God was only a crutch. Those of us who believed, tried many times to share our faith with our dad, but he would reject the truth, boasting of his agnosticism. So we prayed and prayed. The hospice nurse became an answer to our prayers, at the time when my father was stripped of everything he knew to do, realizing he could not lift himself up by these bootstraps of death. We prayed for this nurse sent from God, who was in earnest pursuit of getting through to my dad. At one point, when she felt it was time for her to end her visits, my sister asked her to stay a little longer. And so she did.

On one of my visits with my dad, I sat with him in his study, when suddenly, I noticed he nodded to sleep. When he awoke he spoke of his dream.  “He said, there is a man imprisoned in his home, and the windows and door are barred and there is no way out. He can’t leave the house because he won’t believe.” Then he said, “why won’t he believe?” Then suddenly, again, he nodded once more to sleep, and after a few minutes when he awoke he said, “The man who was imprisoned in his home is now outside, walking away, and is free.” I knew there was something prophetic concerning the dreams, but at the time I wasn’t certain.

Later on, about a week later, when my husband went to visit my father, he witnessed my father in a very humble state. The same nurse who stayed to attend him was there. It was on this day that my father told the nurse he was ready to hear what she wanted to say about Jesus Christ and how he could be saved. She opened the bible and read scripture relating to the gospel message, and then my dad, said a prayer asking for forgiveness and acknowledging Jesus as his Savior.

I remember after that momentous day, witnessing a change in my father. He was humble and grateful, and said to me on one occasion, how he hoped everyone could forgive him for the wrongs he had done. This person was not like my father, and I saw the fruit of his salvation. My father died in the hospital instead of his home, and I was sorrowful because his family was not with him when he passed away.

Since there was no memorial service, requested by my father, I returned to work right away. I remember my co-workers shocked at my presence, and wondered how I was without grief. But, I had asked the Lord to allow me to experience some of the joy my father was experiencing in heaven, and so he did. I was filled with joy and peace and there was no time for mourning, only rejoicing.

Months later I reflected on my dad’s seemingly prophetic dream, and in a flash, I understood what it meant. The man in the house was my dad, imprisoned for his unbelief. There was no way of escape because he was locked into himself. The man outside of the house was also my dad, who because of his faith in Jesus Christ, was set free.

The Truth Will Set You Free

I am first and foremost a child of God, "born again" into the Kingdom of God through faith in my Lord and Savior, Jesus Christ. He has called me to be an "Encourager" of faith in His Son, Jesus Christ. I have learned through some painful trials of His unconditional love. The apple of my eye, is Jesus Christ, the Son of God, the Living Word.
View all posts by Doula Faith →
This entry was posted in Faith Messages and tagged Christ Sets Us Free, He is Risen!, John 8:31-32, John 8:36, Set Free, slave to sin. Bookmark the permalink.

1 Response to Free in Christ