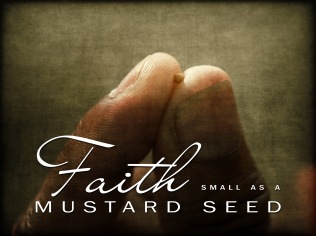 “You will conceive and give birth to a son, and you are to call him Jesus.” Luke 1:31

When the virgin Mary was told by the angel, Gabriel, she would conceive a child who would be the Savior of the world, she was overwhelmed with the news and the “High Calling”.  This would be a miraculous conception taking place through no man but God. But as in all things promised, it was to be received by faith. (Luke 1:38,45)

Elizabeth also conceived a child by the Word of God for she was far past the age of childbirth. Mary was a virgin and Elizabeth was barren, and it was in these two circumstances faith would be required for the conception to take place.

“For faith is the substance of things hoped for; the evidence of things not seen”.
(Hebrews 11:1)
When Mary greeted Elizabeth in her 6th month of pregnancy, Elizabeth’s child leaped for joy; giving “evidence” to her faith.  And Elizabeth said to Mary: (Luke 1: 39-45)

“Blessed is she who has believed that the Lord would fulfill his promises to her!”
Luke 1:45

Knowing Jesus came from God, Nicodemus inquired of the Lord, believing God was with Him. Jesus told Nicodemus He would have to be reborn to see God’s Kingdom. This was something Nicodemus could not understand for it required spiritual discernment. The Lord rebuked him since he was a spiritual leader in Israel and should have known about such things. Nevertheless, Jesus explained the concept using the illustration of the invisible wind coming and going: (John 3)

“The wind blows wherever it pleases. You hear its sound, but you cannot tell where it comes from or where it is going. So it is with everyone born of the Spirit.” John 3:18

It was also so in the beginning, when Adam received God’s breath of life and became alive. (Genesis 2:7)

And it was also when the Lord greeted His disciples, He breathed on them and they received His Holy Spirit (John 20:20-22).

And when the disciples were waiting as one accord in Jerusalem, the sound of a mighty wind came down from heaven and filled the house and as a result they were filled with the “power of the Holy Spirit.” (Acts 2:1-4)

And just as the Spirit of God was hovering over the dark waters in the beginning to produce light, He awaits every sinner’s decision to believe.”
(Genesis 1:1, John 1: 1-14,John 3:16)
“The Holy Spirit will come on you, and the power of the Most High will overshadow you.
So the holy one to be born will be called the Son of God.” Luke 1:35

And just as God called Mary to conceive Jesus Christ and receive His salvation, He calls everyone to repentance, and to receive by faith the Truth about His Son.

“For God so loved the world He gave His only begotten Son, that whosoever believes in Him shall not perish but have everlasting life.” John 3:16

Has Jesus Christ been conceived in your heart thru faith in His Word?

If not, it is my prayer you will receive Him, today.

In this we give birth to God’s Son as we first receive Him (conception) and allow Him to grow in our spirit and manifest Himself in our life. And in this we’ve been called as “children of the living God” into His family and everlasting Kingdom.
(Matthew 12:48-50)

Have a Blessed, Inspirational, Conceptual Christmas!

I am first and foremost a child of God, "born again" into the Kingdom of God through faith in my Lord and Savior, Jesus Christ. He has called me to be an "Encourager" of faith in His Son, Jesus Christ. I have learned through some painful trials of His unconditional love. The apple of my eye, is Jesus Christ, the Son of God, the Living Word.
View all posts by Doula Faith →
This entry was posted in Childbirth Faith, Faith Messages and tagged “For no Word from God will ever fail., believe, birth of Jesus, conception, Eternal Life, High Calling, Holy Spirit, Luke 1, No Higher Calling, seed of faith, spiritual conception, The Word, virgin Mary, Wind. Bookmark the permalink.