Remembering to “Say” Thank You 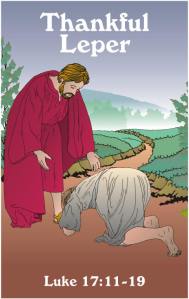 “He fell to the ground at Jesus’ feet, thanking him for what he had done. This man was a Samaritan. Jesus asked, “Didn’t I heal ten men? Where are the other nine?” Luke 17: 16-17

I remember as a second grade teacher, I would wonder how many students would remember to say thank you whenever I gave them a treat. It would usually happen I would have to prompt the first student by saying, “What do you say?”, which he or she would then remember to reply, “thank you”, after receiving a cupcake or special prize. Then all the other students would chime in with the same response. But it didn’t happen usually without a reminder.

Jesus was acquainted with ungratefulness time and time again as He ministered the Word of God and performed miracles. One such experience is when He healed a group of men who were infected with Leprosy. Leprosy is a contagious and painful disease leaving its victim isolated and without hope. Yet, when ten lepers approached Jesus and were healed, only one returned to thank Him; who was considered a foreigner, ostracized from the Jewish community. (Luke 17: 12-19)

Even God’s people took His loving kindness for granted as they crossed the desert and approached the Promised Land. Along the way, God protected them from the heat of the day and the chill of night, providing them with manna and meat and even water from a rock. Yet, they would constantly forget and murmur and complain as though they were treated harshly. Only two remembered how He delivered them from Egyptian slavery and was with them every step of the way.
(Exodus 16:35, 17:6, Deuteronomy 24:18, Numbers 14:26-30)

God who sent His Son, Jesus Christ, to take on the punishment and judgment for all sin is worthy of all thankfulness and praise, He delivered all mankind from the bondage of sin, and made provision for healing, reconciliation and eternal life. (John 3:16)

When I approach His throne of grace, I am reminded what it cost Him to bring me into His heavenly Kingdom. God did not withhold even His One and only Son, and He withholds nothing from those Who believe and are grateful, remembering to thank Him for all His provision and grace.
(John 3:16,Romans 8:32, Isaiah 64:4)

“Enter his gates with thanksgiving and his courts with praise; give thanks to him and praise his name.” Psalm 100:4

I am first and foremost a child of God, "born again" into the Kingdom of God through faith in my Lord and Savior, Jesus Christ. He has called me to be an "Encourager" of faith in His Son, Jesus Christ. I have learned through some painful trials of His unconditional love. The apple of my eye, is Jesus Christ, the Son of God, the Living Word.
View all posts by Doula Faith →
This entry was posted in Faith Messages. Bookmark the permalink.