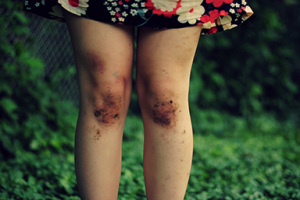 “Tuesday’s Child is Full of Grace”

“The Lord makes firm the steps of the one who delights in him;though he may stumble, he will not fall,for the Lord upholds him with his hand.”
Psalm 37: 23-24

Sometime ago I received a note-card with a brief message. I don’t remember the message but can recall the image. It depicted a little girl with scraped and bruised knees with the caption- “Tuesday’s Child”. I really didn’t understand what that meant until just recently when  the image came once again to  mind. This was after I was heart broken over another personal failure. As I allowed my mind to dwell on the event, the snowball affect was on a roll, and soon what started as a small reflection became a huge obstacle blocking God’s Peace.  So when I realized I was losing all confidence and control, I whispered a faint prayer for His help. As I continued my habit of  reading and hearing God’s Word, the Lord  encouraged me and healed my wounds.  I soon recovered and once again placed my confidence where it needed to be with My Lord, Jesus Christ.  Soon afterwards,  I found myself comforting someone else with the same comfort I received from Him.

I can recount on many occasions falling short of my goal. I became wounded and discouraged.  It seemed, I was doomed for failure as I continuously said or did something at an inopportune time.  These miscalculations reminded me of another person who had the knack of falling on his face. His name was Simon Peter.    If Peter wasn’t anxiously putting his foot in his mouth , he was acting impulsively without the strength to follow through.  In other words, Peter, on a number of occasions came up short, and embarrassed himself for attempting to be “super spiritual”.

I am so grateful to God for including these examples of human failure in His Word. When Peter sunk trying to walk on water, Jesus was there to lift him up. Following his confession of Christ, he blurted out a total misconception of God’s truth. The Lord was compelled to rebuke him.  Then on the night of Jesus’ arrest, Peter boldly stated that he was ready to die for Christ. but instead, what followed was his denial.

What is important is what Jesus had to  say about it. He told Peter that Satan wanted to lay hold of him to the point that he would lose his faith, but He was praying for him so afterwards, he could recover and turn to strengthen others:

“But I have prayed for you, Simon, that your faith may not fail. And when you have turned back, strengthen your brothers.” Luke 22:32

Our trials are never in vain, but with purpose to bring about our spiritual healing and comfort to others, knowing the Lord is making intercession for all our mistakes and failures, how can we not rejoice:

“Rejoice always, pray continually, give thanks in all circumstances; for this is God’s will for you in Christ Jesus.” 1 Thessalonians 5: 16-18

I am first and foremost a child of God, "born again" into the Kingdom of God through faith in my Lord and Savior, Jesus Christ. He has called me to be an "Encourager" of faith in His Son, Jesus Christ. I have learned through some painful trials of His unconditional love. The apple of my eye, is Jesus Christ, the Son of God, the Living Word.
View all posts by Doula Faith →
This entry was posted in Faith Messages and tagged 1 Thessalonians 5: 16-18, battered heart, depression, failure, God's faithfulness, God's Grace, Luke 22:32, Psalm 37: 23-24, The Lord's intercession, Tuesday's Child. Bookmark the permalink.